This was the tenth year of EclipseCon and my fourth time attending. I have been using the Eclipse IDE for over 12 years and so much has changed with technology and developers’ expectations. At the beginning, just having a single Java IDE that was smart enough to edit, compile, run, and debug your code was a major breakthrough. And for many years, the trend was to integrate into the IDE, with the expectation that all tools be absorbed into the IDE. Now, this trend is reversing and developers are starting to expect IDEs that can seamlessly connect to tools, allowing developers to use the tools in the way that makes the most sense for them. The most interesting theme for me at this conference was trying to figure out how developers will be working another 10 years from now.

The future of the IDE

The Orion IDE is a prime example of this reverse-integration trend. Orion is a hosted IDE with a light-weight plugin model. One way that the plugin model allows integration with third party tools is by linking out to them in other browser pages. This allows developers to do programming tasks in the IDE, but still have easy access to external tools for deployment, testing, and monitoring. Ken Walker gave a good talk showing this, cheekily called Browser IDEs and why you dont like them. Another example of this is the Mylyn hosted task list, which Gunnar Wagenknecht and I introduced in our talk Unshackling Mylyn from the Desktop. The main idea is that current Mylyn task lists are restricted to working inside of a single Eclipse instance, but developers are looking to interact with tasks outside of the IDE (in the browser, on the desktop, on their phones, etc).

The hosted task list provides developers with this capability using different kinds of clients that all operate on a single notion of a task list that is hosted remotely. We provide a simple API so that third parties can provide their own clients. What we presented at EclipseCon was early work and we are looking forward to showing more of this at future conferences. Lastly, Martin Lippert and Andy Clement, my former colleagues at Pivotal, introduced Flux, a novel approach to a more flexible development environment. The main idea is that developers may want the simplicity of developing in the cloud, but also dont want to give up the possibility to develop in a more traditional way on the desktop. Flux allows you to connect your local workspace to a cloud host that provides services like editing, compilation, and refactoring. This way, you can work in the cloud while still being able to drop down to the desktop whenever you need to. Watch the screencast. It is still early work, but it is quite compelling and Im looking forward to seeing how this progresses.

It shouldnt be surprising that the Java 8 track was the most popular at EclipseCon this year. Java 8 was released in the middle of Alex Buckleys The Road to Lambda talk. What I thought was most interesting about this talk was that it focused on the design decisions around implementing Java 8 lambdas, why it took so long many years to do so, and why Java is now a better language because of its relatively late adoption of lambdas. I found Lets make some 0xCAFEBABE particularly interesting with its deep dive into byte code. Lastly, API design in Java 8 showed how libraries and APIs can improve by taking advantage of new language features.

This year, I helped organize an Eclipse hackathon. It was a great experience. We had over 50 attendees, split roughly evenly between project committers and new contributors. The goal was for new contributors work on some real bugs in Eclipse, while being helped by project committers who guided them through the process of setting up a workspace, choosing a bug, and submitting a patch. By the end of the evening we had 7 contributions accepted to the code base. It was encouraging to see so much passion about working with open source. 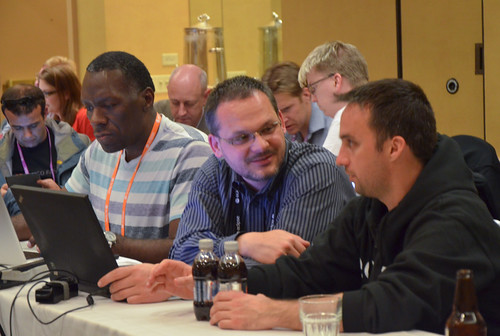 There are plenty more photos from the event on the Eclipse Foundation’s Flickr stream. It was truly a wonderful conference and there was so much more including 3 excellent keynotes and of course lots and lots of beer. Now that Im back, I need to catch up on sleep, but Im already looking forward to next year!